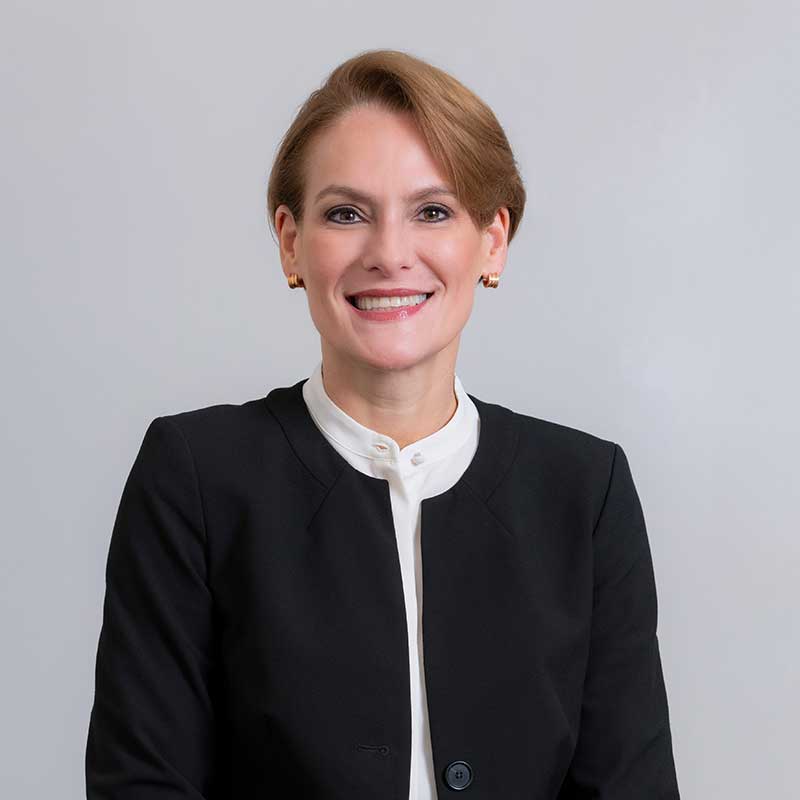 Mrs Hulbert has 25 years of professional practice. She is the founding partner of the Hulbert Volio Montero, a boutique law firm in Costa Rica. She has vast experience in national and international law, with special emphasis in dispute resolution and ADR on complex cases.

She is a professor of international contracts and international law at Lead University and lectures on international commercial arbitration; investment arbitration; International Bar Association Rules; anti-corruption practices; female participation in arbitration; wills and probate proceedings; and other related matters. She has given lectures and conferences in Costa Rica, Honduras, Guatemala, Panama, Mexico, Colombia, Perú, United States of America Spain and France.

Mrs Hulbert articles are widely published. Her articles include “Wealth Preservation” in Plenitud Magazine (number XIII, 2012); “The Price of Gender Bias and the benefit of support” in Dos Magazine (volume two, edition six, number 12, 2014); “Analysis of the IBA Guidelines on Party Representation in International Arbitration” (2014); “The Creation of the Iberoamerican Arbitration Center and Costa Rica as the Presidential Headquarters” in International Law Magazine El Foro, (Costa Rican Bar Association, 2015); “The Wills in Costa Rica” (2015); “Bilateral Investment Treaties in Costa Rica” (2016); “Agency and Distribution Agreements-Costa Rica” in Wolters Kluwer International (2017 and 2018); “Judiciary control of arbitral awards in other countries; a brushstroke on the CAC Congress in Bogota” (2017); “What is the Probate Jurisdiction if the Decent had a connection with Costa Rica?” (2017); “Repercussions of the Tax Law on Legal Entities” (law number 9428, 2018); “Award Annulment in International Arbitration” (2018) and “Reference on International Arbitration for Costa Rica” for Latin Lawyer (2018–2019).

In 2012, Mrs Hulbert received the Butterfly Award the Organization ALAS, in recognition of “her leadership, courage and ability to evolve and change as a professional, building a highly inspiring legacy for the next generation of women “. She is ranked by Chambers and Partners as one of the best dispute resolution lawyers in Latin America (2016–2020). In 2018, she won an Acquisition International Global Excellence Award as the Most Influential Woman in Civil Litigation in Costa Rica.